That was…The Year Of the Dog: Hamish 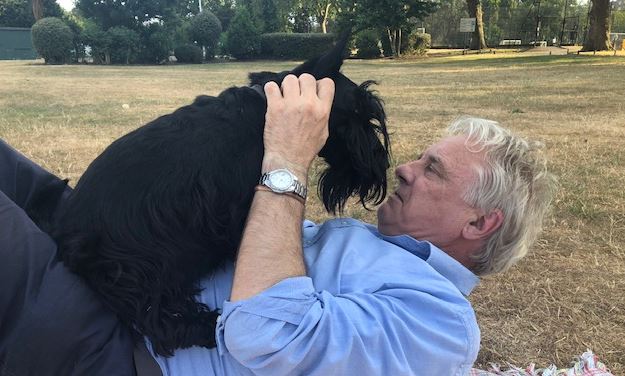 February 2018 to February 2019 was the Chinese Year of the Dog. On the occasion of this auspicious event which comes just once every 12 years, we asked members of London Scottie Club to write about the highlights of their Scottie’s year and we share these with you in a weekly series of blogs. Please expand gallery photos by clicking on individual pictures below the article.

Morning’s can be tiresome particularly if I have been awake on fox alert during the night. I try desperately to remain asleep as Dad wakes Daniel for school and Mum gets ready for her work. I think foxes are misunderstood creatures – well certainly the one that comes and barks for me is. When he arrives I go and knock and scratch on Dad’s bedroom door and pressurize him to take me out. The fox is always very friendly and now we know each other he doesn’t run away. I would sleep in until lunchtime given the chance but Dad is as cruel to me as he is to Daniel and drags me reluctantly out of bed.

Then it’s off for my long walk. It’s been a busy year and a lot has happened but on these jaunts we have had a particular focus which has been obedience and discipline. It has sometimes been slow but definite progress has been made. A two way process has been established with a bit of give and take on both sides. Dad takes me on most walks and he has learned that I’m happy to come if he calls at a suitable moment and has a treat on offer. Unfortunately he still doesn’t understand the principles of ears and that I don’t hear very well if I’m not facing him or that a good sniff is not to be interrupted. I have found it frustrating when he has walked over and replaced the divots I have worked so hard to dig up on our local rugby pitch. Squirrels are vermin and so I do not understand why he has often made himself hoarse screaming into the distance as I chase after them; I don’t know where they go because I chase and then they suddenly disappear but I keep running.

I have taken it upon myself to add a little decorum to the local parks that I frequent. I don’t approve of any animal bigger than an alsatian and whether it be a great dane or a horse I tell them so in my loudest sergeant-major voice. I find unaccompanied swans very arrogant and on more than one occasion I have had nose to beak confrontations with one. Vehicles are an absolute, “No,no,” in a park and I have several run ins. The park police didn’t take the hint and had the audacity to threaten to ban me, the second time I chased and stopped their car. The driver of a massive John Deere tractor stopped and got out of his cab because I refused to move out of the way and a couple of guys in a white lorry made the excuse that they needed their lorry to empty the bins. My latest project is trying to divert the Heathrow Flight Path; I try to bark loud enough at the planes for the pilots to hear.

There’s usually something interesting going on. I’ve lain on the mat in a pilates class, joined in football and once somehow ended up like a zebra when I was helping a man paint the white lies on the pitch. I’ve helped builders who were making a children’s slide. A secret technique I have perfected is getting the owners of other dogs to give me their treats. If you think I’m going to reveal how it’s done you’re mistaken.

When we get home from a walk I hope Mum is working from home because she understands how hungry I get from all this stress and exercise. She has given up worrying about ridiculous things like my girth and is pretty generous with the food. At mealtimes I sit at her side of the table and hope that Dad and Daniel don’t see the little tit bits because they get mad.

If I’m lucky I get the chance of a snooze in the afternoon. It’s Daniel’s GCSE year and so when he arrives home he usually has a load of prep. I like to help where I can and so I always insist on sitting on Dad’s lap at the computer when he helps Dan and so the three of us can study together.

After supper I usually sit between Mum and Dad and watch the latest Netflix box set. The others go to bed to read after the 10 O’clock news but I still look out of the window on guard duty for an hour before settling down hoping there will be a nocturnal visit from my friend the fox.