Launched in March 2016 as a Meet Up social group, the not-for-profit London Scottie Club was the idea of journalist and social media consultant George Matlock.

“The breeder from where our two Scotties came normally has 6 people on the waiting list for Scotties. That jumped to 36 after the Glasgow Commonwealth Games in 2014 and mushroomed to 150 after the 2015 Crufts win by “Knopa” the Scottie. A thrilling resurgence of this rare breed, but frankly I grew a bit anxious they continue to go to happy homes. That’s where the Club comes in,” George says.

Since 2017, working with Scottish Terrier Emergency Care Scheme, George helps the charity in south London when there are rehoming requests or someone would like to adopt a Scottie. 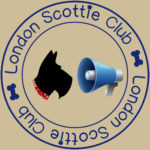 To recognise, celebrate and promote best practices for keeping Scottish Terrier Dogs, to mutually support our members, and make the general public aware of this complicated, special and rare breed.

To discover about the breed as our membership grows, so we can chart a map of where Scottish Terriers live in London and ensure the benefits of our Club reach them.

To provide mutual support to our members, exchange information, tips and ideas, and provide a social hub for owners and their dogs to meet regularly and foster community.

To work with professional experts, academics, media, advertisers and the general public to defend the good reputation of Scottish Terriers, as well as foster cooperative relations with Scottie organisations outside of London.