Scotties By The Sea, Prizes by the Bag 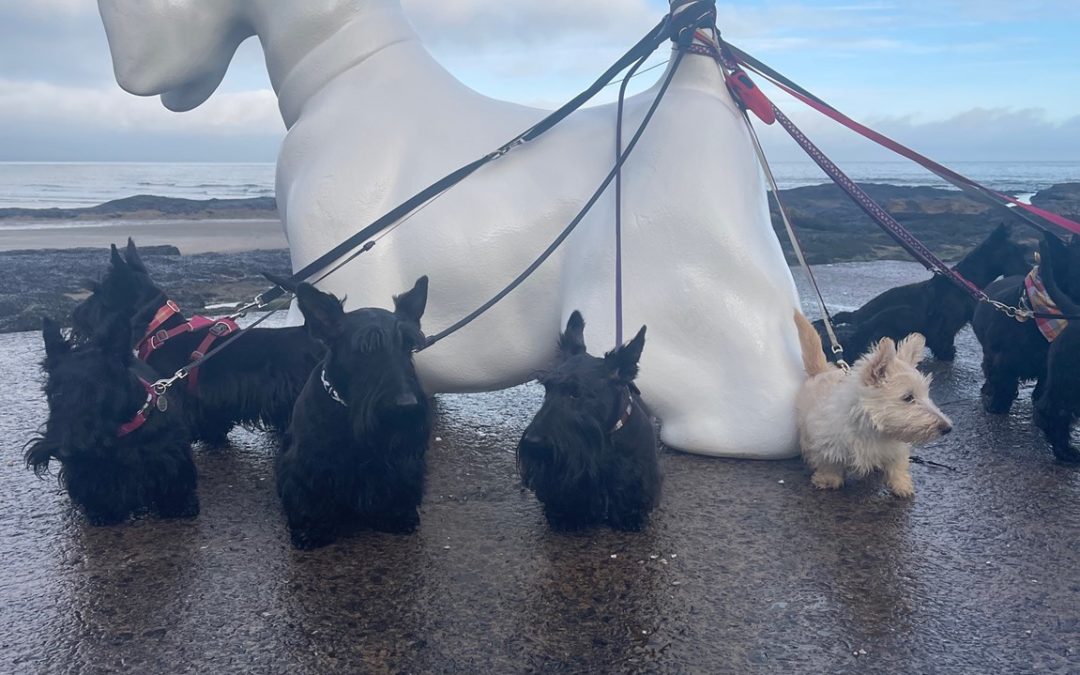 There’s a fashion for having statues of animals painted by local artists scattered around towns. Edinburgh has Giraffes. Windsor has Lions. London has hosted Elephants and European cities had cattle.

Next year St Andrew’s in Scotland will have SCOTTIES!

What can be more Scottish than taking Scotties to St Andrew’s on St Andrew’s Day to help promote the launch of the prototype of these giant Scottie statues? Nothing, that’s what!

My Scotties Douglas and Maggie and me did just that.

On the 30 November we turned up at the appointed car park at the appointed time, to meet 26 other Scotties and one giant Scottie sculpture. Having been photographed with it and filmed walking past it (and yes Douglas did cock his leg against it) we all then did a wee walkaboot roond the toon to be photographed in several of the locations where the statues will appear.

After a couple of hours posing and promoting, we were all treated to some delicious ice cream at Janetta’s- St Andrew’s famous ice cream parlour. Where we were photographed again.

And with that our job was done. Most dogs were incredibly well behaved and of course drew LOTS of attention from locals and tourists alike.

Local and not so local artists are being invited to produce designs and the 30 winning designs will be created and the Scotties will be dotted around St Andrews for ten weeks from 1st September next year, before being auctioned off for charity.

For more details of the day, including photos and a video, then head over to

Scotties By The Sea: Pups unleashed to mark the launch of spectacular St Andrews art trail

The official website is scottiesbythesea.com so take a look regularly as photos get updated.

And of course Douglas, Maggie and I look forward to welcoming you when you ALL come up to see the Scotties next September.

And now, if I could have a drumroll, I’d like to announce a surprise competition!

As being part of the day we were all given a tote bag that contained a dog towel. Perfect for a post St Andrew’s beach frolic. As I had brought two dogs with me, I was given two- but I really only need one.

If you’d like to get your paws on this very very exclusive bag and towel combo – then read on. 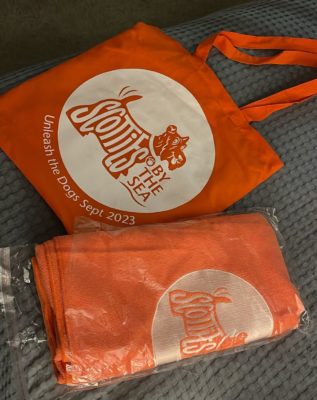 This could be yours! Calling Wordsmiths! Be in with the chance to win!

To win this bag and towel you need to write me a limerick about your dog. Or maybe your dog could write it him or herself. Once the limerick is perfected them email it to me at frasergrant@mac.com with the subject title ‘Scottie Limerick’-please also include a photo of the Scottie in question.

The winning poem as chosen by Douglas , Maggie and myself will not only gain its author the coveted prize but will also feature, along with the runners -up , on the website on Burns Day- as a celebration of that famous Scottish Bard.

Here are two to get your creative juices flowing

The problem of walking with Maggie
Is she tends to be terribly draggy
“I hate it’ she said
‘Not to lead but be led
It just makes me incredibly naggy.’

Now here’s a wee little gallery of the historic day in St Andrew’s on 30 November 2022: