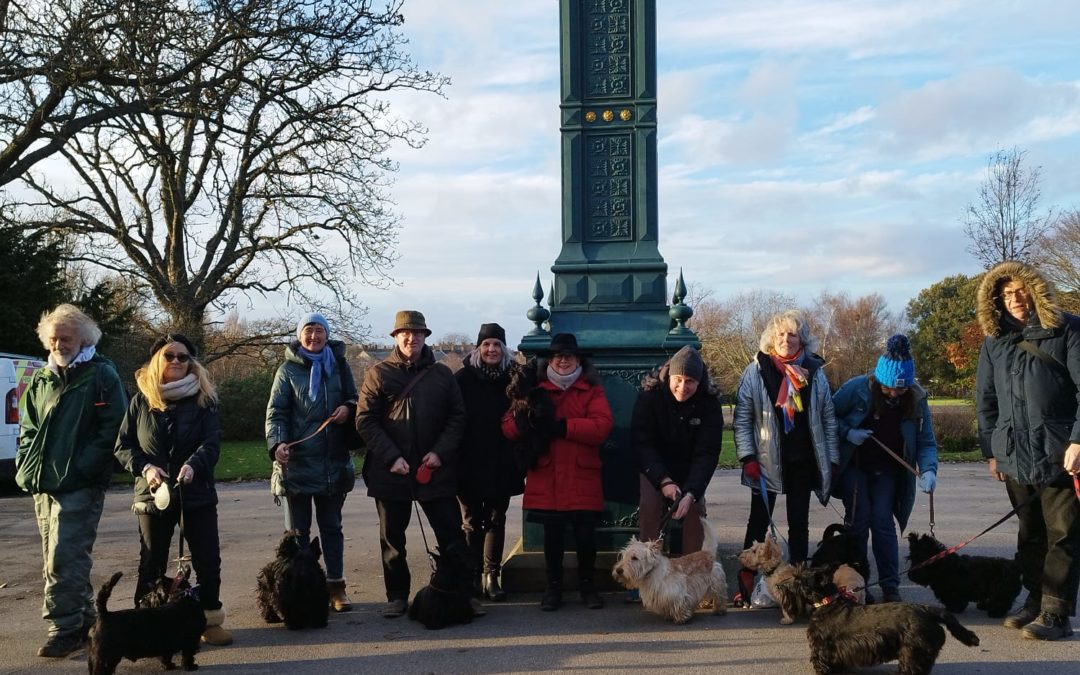 London Scottie Club Members voted for it and they got it. A walk on the wild side of Sarf London on Thursday 29 December, the last Walkabout of 2022.

Cold Turkey-sandwiched between Christmas and New Year is always a bit tricky, but as it turned out we had 9 Scotties present, and it might have been 10 if new member Olga who kindly joined in the fun had brought her “very muddy” VIP Bruster too.

The walk was held in Brockwell Park, a medium-sized venue boasting hillside and a cafe on the summit. The weather had been very wet after Boxing Day, so we were very lucky indeed to also be sandwiched with sunny weather between that and more rain expected over the next few days into New Year! The weather simply got better and better! 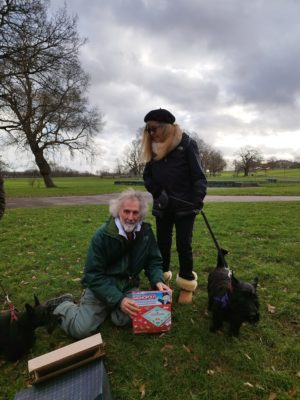 And the Monopolist is…

You could almost hear the ditty The Lambeth Walk echo from behind every tree as a breeze was our only challenge, and the grassland was mostly soggy.

Brockwell Park is in the London Borough of Lambeth, famous for The Lambeth Walk, a song first made famous by Edward W. Rogers in a composition in 1899 that was popularised by music hall singer Alec Hurley.

The version we all probably know is a later one, from the 1937 musical Me and My Girl. The song itself takes its name from a local street, Lambeth Walk, once renowned for its street traders and working-class culture in Lambeth. The tune also gave its name to a Cockney dance by Lupino Lane that became popular when the musical was released. A film followed in 1939.

But this was 2022. And we had a lot to celebrate. A year of fresh achievements for the club, and one that included a tie-up with Hasbro, the famous licence holder of the Monopoly game board that became a sensation in the 1930s.

During the year, we had tried to make our series of Walkabouts – which now number at least 6 per year – linked to the London edition of the Monopoly game board. It was not always easy as some spots built over or otherwise not conducive to a meaningful walk with our Scotties. And it is the wellbeing of our Scotties that comes first, always.

But with all the amazing Walkabouts that we managed in 2022 we also logged the attendance of our Members and their VIPs using the scanning technology that we first piloted since September 2021.

The result of the log was that we could see which Members have been the most active in the Club’s Walkabouts, a major part of belonging. We sometimes get apologies from Members who have just moved out of London and regret they never managed to make it to any of our Walkabouts. It is indeed such fun when we do meet, and your Scottie needs a walk, right?

But what better way to honour our loyal Walkabout Members than to offer them a chance to win a prize? Of course, any one at random could be the winner, but if you attend more walks it stands to reason you have a greater chance of winning. 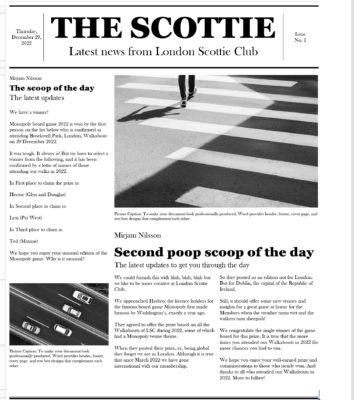 Read all about it in this Sarf London rag

And that logic is exactly what happened on Thursday. We were uncertain how many Members would attend as no one responded that they were definitely coming in the days leading up to the Walkabout. And some local Members could not attend, as they told us today, on account of visiting family at Christmas.

But those who did attend were not disappointed. The Monopoly board prize was to go to one winner. But we wanted to present it to them at the Walkabout. So imagine our ecstatic surprise when all three potential winners actually attended! It was superb to see them. And all the more of a climax to read out in reverse order who missed out by a dog’s whisker.

Hector (Glyn and Douglas) were the worthy winners, as they rarely missed a gig this year. And the same applies to Lexi’s owner. Maxine had to take a break after the sad loss of her Rocky, but she too was in with a chance as she appeared with six-month old pup Ted.

Our thanks also go to Glyn, Zelda, and Catherine for spoiling us with lovely cakes and biscuits and John and Douglas for shelling out for coffees and teas.

Our final point of call on the summit of the park was a lovely Victorian clock tower, to anticipate the New Year!

The London Scottie Club’s committee will be deciding the dates of the 2023 Walkabouts at their January quarterly meeting. So stay tuned for that.

But first, let’s share the fabulous photos taken by John Watkins and new Member Olga Paskevych. Let’s see how many of our Scotties you recognise!

Happy 2023 everyone! See you for more Walkabouts!