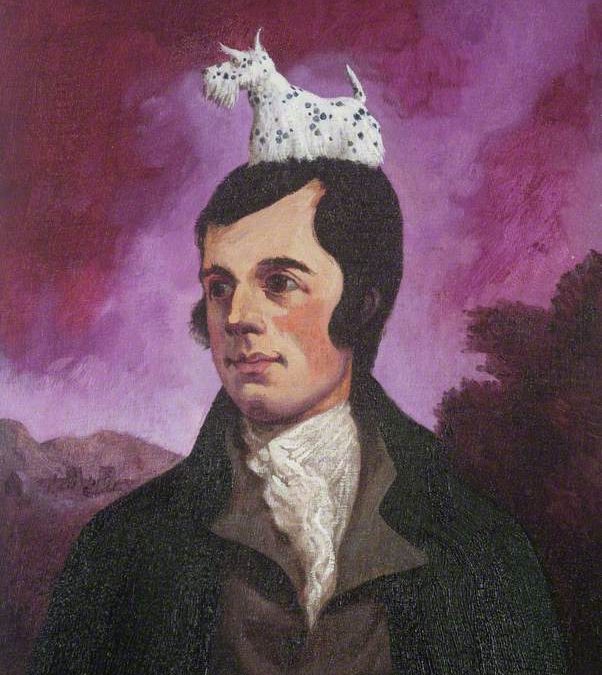 If your little darlings have a particular spring in their step on the 25th of January, it’s because it’s the day of their National Bard- the incomparable Rabbie Burns. Not many people know that before he penned Tae A Moose, he was originally going to call it Tae A Scottie, and it ran thus:

To celebrate his birthday, alongside feeding your fluffy friends haggis and neeps**, as well as maybe a wee dram ***we at the London Scottie Club ran a wee poetry competition to encourage the bard within you all. We asked for Scottie themed limericks and the winner will receive a special tote bag and towel to celebrate the launch of Scotties By The Sea at St Andrews this September.

So without further ado-let’s applaud the runners up!

Fraser Grant gave us two. Obviously, he can’t award the prize to himself, so he gallantly accepts position of runner up.

The problem of walking with Maggie
Is she tends to be terribly draggy
“I hate it’ she said
‘Not to lead but be led
It just makes me incredibly naggy.’

Cath Marchbank penned this lovely limerick about Lottie the Scottie. A convincing runner-up!

There once was a Scottie called Lottie
Who terrorised their friends and drove them dotty
She would take all their toys
She pulled faces at the boys
That was our Scottie Lottie.

Glynn Lee gave us four wonderful limericks. So prolific. This made her a strong contender-but she was just pipped at the post by our winner.

There was a young Scottie called Hector,
Who thought he would be an inspector
But inspecting got boring
So he started just storing
And now he’s become a collector

Matt Evans sent just one limerick, but the use of the double contraction ‘Moliere’d’ve” was breathtaking in its brilliance. A well-deserved runner-up.

There once was a floppy-eared Scottie.
Tartuffe was his name, doggy totty.
Moliere’d’ve been proud
He stood out from the crowd
With his eye for the classic cute bottie.

Tina Cole gave us a lovely limerick about her Dolly. Congratulations on being a runner-up!

Off on a trot through the grass
Dolly’s a scotty who’s fast
With her black coat so smart
She’ll steal any boy’s heart
She’s at one with the world, life’s a blast!

And now to our well-deserved winner. Being a gallus Scots lass she had the edge over the competition with her slight Scots vernacular. Also, the use of the double limerick to tell the tale was innovative and wistful. Congratulations Elaine! Your prize will be winging its way to you as soon as you send me your address!

I’m a bonnie wee lassie you know.
Cos my mammie’s aye telling me so.
But when she appears with that brush,
I’m up the stairs in a rush.
I’d much rather be messy and go!

O’er the fields I scamper and play,
Rolypolys perhaps on the way.
And when into town we do go,
Lots of treats kindly flow.
I’m a lucky wee Scottie I say!

Congratulations and thanks to all who entered. And as Burns himself said “Here’s tae us, whae’s like us, gang few an’ they’re a’ deid!”