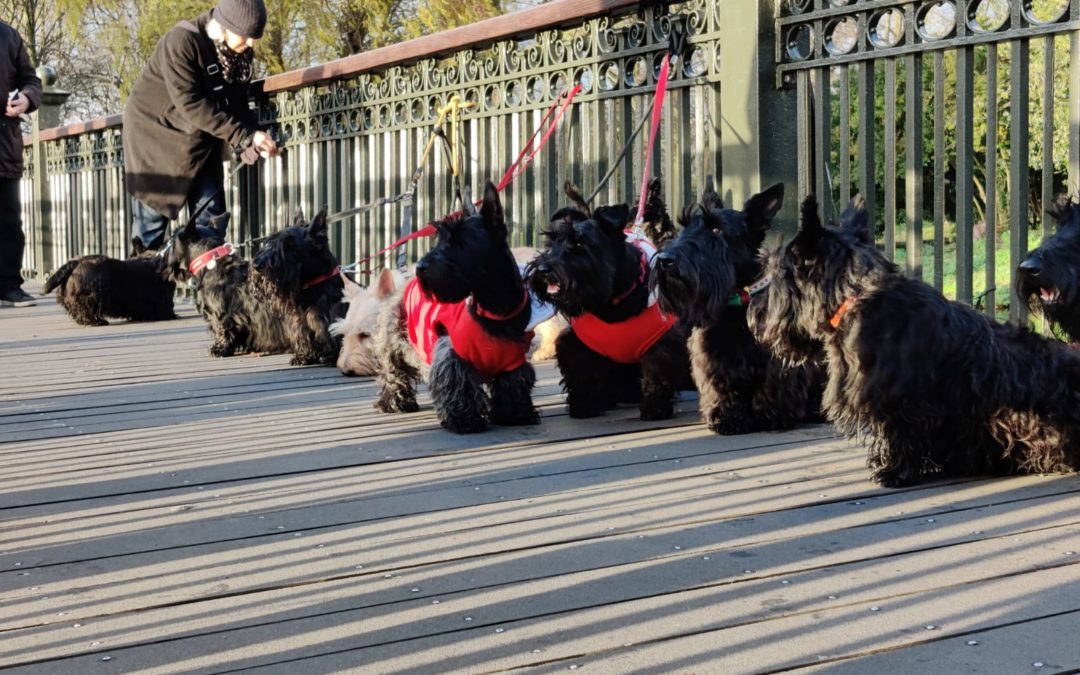 On Sunday, members of the London Scottie Club were out in force on the last Walkabout of the year. A right Royal Walkabout at that and appropriately in London’s Regent’s Park, home to royal intrigue over the centuries, and now a good stomping ground for Scotties.

Since Lockdown restrictions were lifted in May, the club has managed six Walkabouts, more or less one a month, and that we consider optimal.

A total of 11 Scotties were present for this Christmas walk: Archie, Ben, Edwyn, Hector, Heidi, Keeva, Lexi, Maisie, Pikush and Pudding. Bronte also came all the way from Windsor.

The weather turned out to be the best of the weekend, with sunshine as well as mild temperatures for the afternoon. Although we were only able to complete half of the planned route, this turned out to be ideal for dogs of different walking capacities. We headed to Longbridge where photos were taken, reminiscent of the Christmas Walkabout in Windsor in December 2019. After that, we headed towards Broadwalk Cafe where members were treated to a choice of mulled wine or tea with their mince pies. A proper chance for members to chat and get to know each other.

We are most grateful that although Auntie Didi was unable to join us, as our oldest honorary member, her nephew kindly made a donation which covered refreshments at Regent’s Park.

Before everyone dispersed there were also gifts for the dogs, in the form of baked treats. One dog, however, will receive theirs later. And here’s why.

We owe a big thank you to Meeting Marshal Nicola who kindly planned the route and selected the Cafe and then put me in touch with the manager. Alas Nicola and her Hami could not join us on the day as Hami is on heat.

During the hour at the Cafe we were also treated to some great shifts from Edwyn, named after 1990s crooner Edwyn Collins whose big hit was “A Girl Like You”. You can see those moves in the video above.

Members also heard about plans for a thematic Walkabout series in 2022. More about that on the website soon.

A lot of planning will be required for the Walkabouts in 2022 but we will try to make it a breeze for members to walk. It is likely that January and February will be without Walkabouts. We will announce the new date early next year. A big thank you to those members who were able to make it today. It is always great to see you.