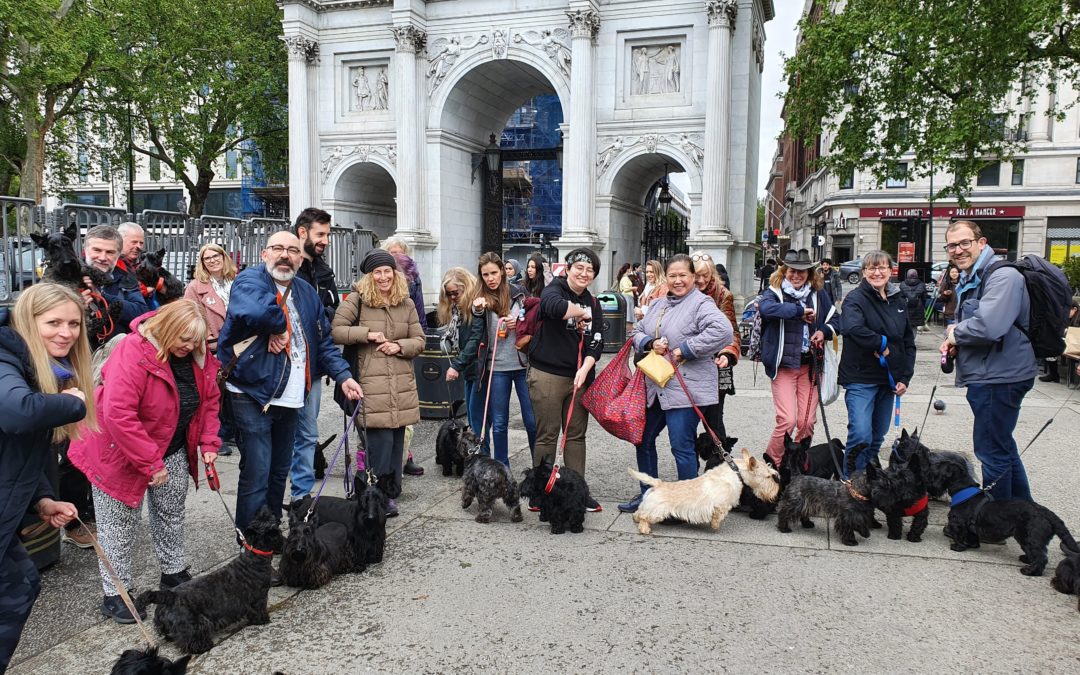 After a torrent of WhatsApp messages for 15 months and several Zoom calls in 2020 to keep us company, London Scottie Club members were finally unleashed as London’s pandemic lockdown restrictions began to be lifted, and met on 22 May 2021.

A record 21 Scottie dogs marched through Hyde Park, London with 30 adults (the maximum allowed under current social distancing rules). At first we were nervous as there was quite a police presence in the park. Later, the reason was to become clear. 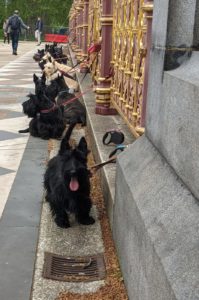 We started the Walkabout at Marble Arch with a group photo and we encouraged members to push out their elbows in the now-famous pandemic greeting. Then we crossed over to Speaker’s Corner, the famous spot where anyone can stage a political presentation, commonly a rant. And with the so-appropriate sign “The Hecklers” beside us we filmed all 21 Scotties tied to railings like the Suffragettes of 1918 who campaigned for women’s rights to vote.

The weather had been unsettled in the wettest May many can remember, but on the day itself it was mercifully dry and even sunny. The wind behaved too. Hyde Park had been chosen by the members in an online poll, as was the time of day. It was more than democracy at work. It was also sheer good fortune. Had we opted for 3pm start rather than midday we would have risked the 4pm downpour of rain as well as a flood of thousands who turned out for a Palestinian peace march.

Hyde Park was in many ways also symbolic for us. Although the second time for the club, it was a poignant most-central location for the first Walkabout since lockdown. Members had been eagerly awaiting this day, after the frustrations of not meeting for over a year. The last Walkabout was in January 2020, organised by meeting marshal Sonya, who also came this time with her wheaten Scottie, Phoenix.

Thanks to a recommendation from member Matt, Jess brought along Dolly and her own family. By the evening Dolly was signed up to the club! We also met residents who live near to Hyde Park. A well-heeled couple were taking a leisurely walk in the park with their Scotties Felix and Sybil, when they came upon our gathering. Bemused they enthusiastically came over and pledged to join!

In all, ten new members and their Scotties signed up that weekend.

The plan had been to head due west to Kensington Palace. But in the event we slipped somehow south and headed towards the Serpentine, the shallow lake in the middle of Hyde Park. We then ventured over the single bridge over the Serpentine, and came across the Albert Memorial, where we stopped for a picnic and the final stop before members dispersed. 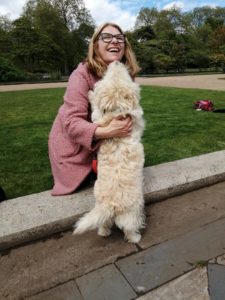 Here we celebrated three Scotties’ birthdays this month: Archie, Ben and Flora! Food for the dogs was smartly laid out on plates before them while they remained inches away tied to the railings of the Albert Memorial. Drama struck when a Huskey thought it was a good idea to venture near the food. But Scotties outnumbering him and looking like they were only accepting a no for an answer, soon had the ultra-northerner scampering away. And that despite all of them still tied to the monument’s railings!

As the dogs tucked in and so did the owners, well, to ginger cake from Zelda, some choc-rice nibbles Jann named “Stickies” and Kate’s melt-in-the-mouth Scottie-shaped chocs, it was hard not to reflect that if Prince Albert may have been bemused, his Queen Victoria, a firm fan of Scotties, would probably have been amused.

As members then dispersed the WhatsApp Convo continued to be full of real-time messages and the day must have had a total of 100 as members shared photos from the day including Scotties exhausted by a 3-hour gig, sleeping at homes all around the capital.

You can see more photos and videos as shared on WhatsApp in the photo and video galleries below.

As Walkabouts are restored let’s look forward to many more in 2021 and to breaking the day’s record time and again!