Puttin’ On The Ritz 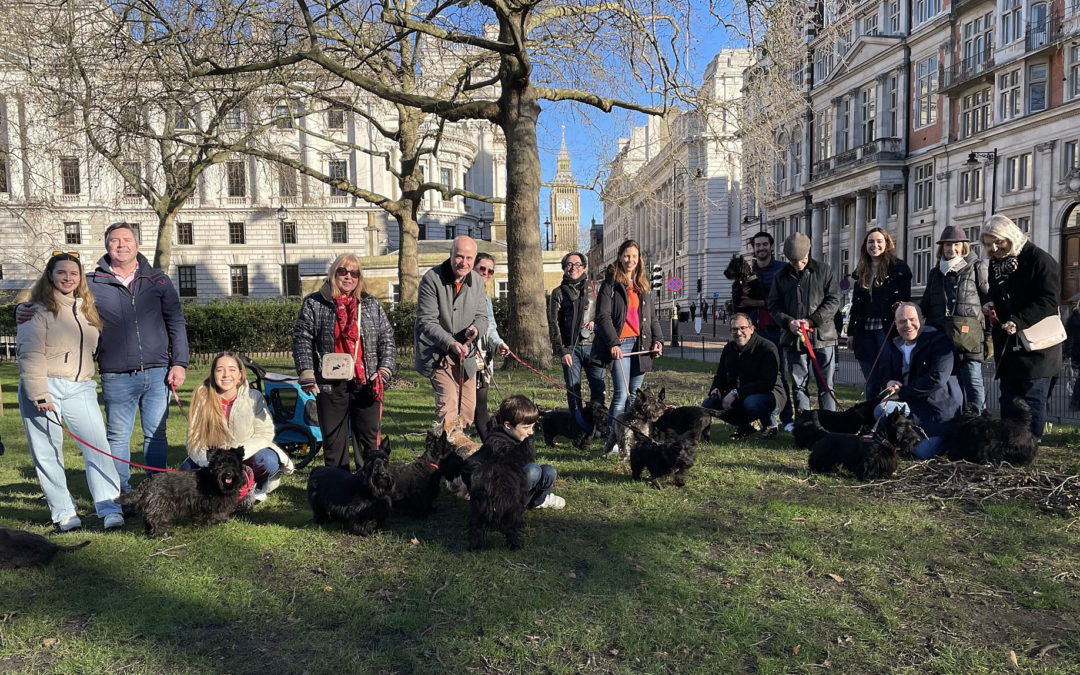 London’s Scotties turned out in force for the first Walkabout of 2022. A total of 19 Scotties descended last Sunday on The Ritz next to Green Park.

Re-enacting one of the locations of the London Monopoly board game, all those present brought their Member Tags and these were scanned, automatically placing them into a prize draw in December for the winner of a Monopoly set, kindly being donated by Hasbro UK, it was confirmed on 2 March.

The walk took in Green Park, Buckingham Palace, Birdcage Walk, St James’s Park and nearly managed to reach Big Ben. Protestors against the recently launched Russian invasion of Ukraine prevented us from concluding the walk in Parliament Square, but we still managed to have two Bens in our midst. Ben, the brindle Scottie as well as Big Ben, the landmark of London.

We made new friends as some Scotties came for the first time, including Zelda’s YouTube hit puppy Lady Agatha. And we welcomed back trusted stalwarts of the Walkabouts which were what brought us all together and resulted in the formation of London Scottie Club back in 2016.

Outside Buckingham Palace, we also marveled at the approach to HM Queen’s official residence in the guise of the Victoria Memorial. Queen Victoria, the previously longest-surviving monarch was a huge fan of Scottish Terriers. Meanwhile, Her Majesty Queen Elizabeth II was tipped off by one of our members – her family doctor no less – of a LSC Walkabout in Windsor in December 2019!

Perhaps the biggest highlight of the Walkabout – in one of the most tourist-trekked areas of London – was the weather. Having postponed plans for the Walkabout on 19 February because of bad weather we were blessed with cloudless skies, a relatively warm afternoon and a world away from the wet weather that greeted us for the next three days.

We share below some of the photos that members on the walk shared as well as a few videos. The date and location of the next Walkabout has not been confirmed but it again may follow a Monopoly theme. And remember, the more walks you attend in 2022 the better chance you have of winning the board game!

Filmed lineup near "The Ritz"