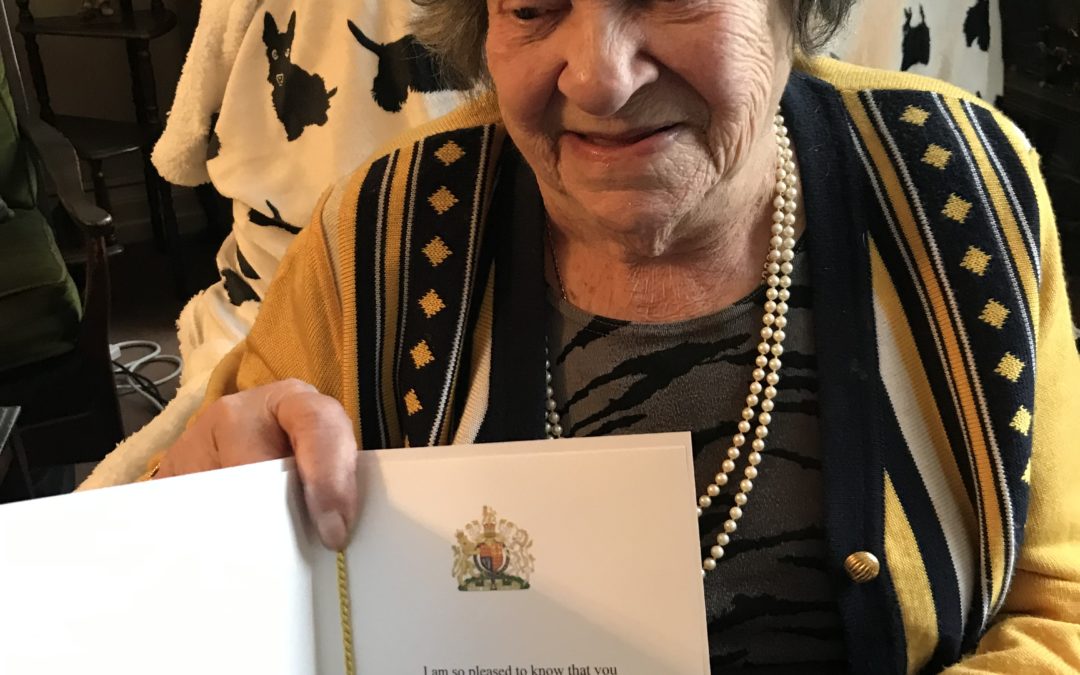 It is not every day London Scottie Club can do a good turn for wider community relations. But it’s not every day an unbending Scottie fan turns a century.

Meet our newest and yet oldest member of the London Scottie Club. Auntie Didi of Maida Vale, London, had a big surprise the day before she turned 100 years. LSC Meeting Marshal Zelda and her Scottie Archie, together with Judy leading the paws of Teddy, and Joshua who brought along puppy Dolly, made the triple wow for Didi on the 10 November and brightened up what was a day of drizzle in the capital.

As a little extra gift, London Scottie Club is making Auntie Didi an honorary member today, on her 100th birthday. As she told Zelda in an exclusive interview on our YouTube channel, Didi’s family has had Scotties for more than 100 years because her parents had them and later Didi kept up the tradition, having a total of five generations of Scotties in her lifetime.

Didi’s family came to Britain from Germany before the Second World War, and the only dogs the family chose to have are Scotties. But these days Didi cannot keep a Scottie in her comfortable apartment and instead has an extensive collection of Scottie memorabilia to keep her company, some of which you can see in this video report. And today, Didi also has a card from Her Majesty The Queen, herself aged 95 years.

But what is remarkable is that Didi is still very sprightly and independent, able to live alone and with family nearby. Although visually impaired, Didi can hear better than some people half her age. As many will be commemorating Armistice Day 1918, and some European nations such as Poland and Hungary also hold their Independence Day celebrations after Europe’s empires crumbled, so too Didi will have a lot to celebrate with her family at home today, as she talks endlessly about her first pride and joy, the Scotties who have enriched her life.

We thank nephew Clive for getting in touch with the LSC this year, and for the family’s hospitality to representatives of the Club who were present. And of course we wish Auntie Didi another 100 years!

We share below some of the photos of this momentous and rather moving occasion.