Brighton derailed but Kipling’s house is a Scottie’s home 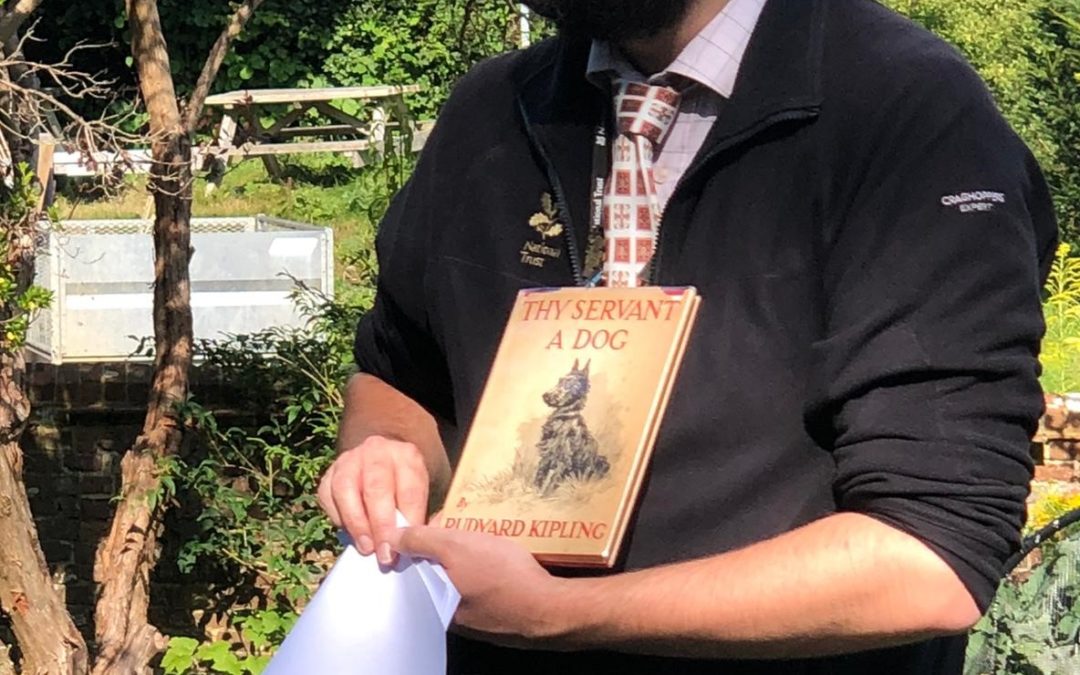 Our most-ambitious Walkabout to date was always going to be a challenge. The Walkabout on September 11 was the first held at two locations. And what is more, it was the first time we had used the new Member Tags.

Let’s start with the great news about the Tags. They worked! And we know that the following dogs were with us on the walk: Zelda’s Archie, Neil’s Bunty, Alistair’s Flora, Glyn’s Hector, Michelle’s Keeva and Maisie, George’s Pikush and Pudding, Maxine’s Rocky, Matt’s Tartuffe and Willow. A total of 11 dogs! Which is very impressive since this was also the furthest out of London that London Scottie Club has organised an event.

The first leg was Brighton. We met at 11am at Brighton Pier and had the bad news that the Volks Electric Railway was not running. We had been assured two weeks earlier that it would be running. Yet it seems that the British Rail engineering plague hit them too. Apologetic staff said they tried to communicate it on Friday. Well, that’s cold comfort for holidaymakers who might by then have already arrived for a weekend by the sea.

But we kept our spirits high and after a 100% success rate of scanning the Member Tags we proceeded to a dug out near the Pier for a short Walkabout. As rules are currently in place that prevent dogs on the shoreline until next month, we were relieved to find the special embankment and made full use of it! Some of the event was being recorded for the London Scottie Club promotional film which debuts later this year.

But like the weather, the day was about to get better and better.

After we left Brighton for a one-hour drive through stunning Sussex countryside, the sun was really coming through.

When we arrived, a tad earlier at the second leg of our tour, others from Brighton were also parking up. The National Trust Bateman’s estate in leafy Sussex was the home of one of Britain’s most famous authors, Rudyard Kipling.

As some of you will know, Kipling was also a fan of Scottish Terriers, or Aberdeen Terriers as they were once known.

Gary Enstone, the estate manager at Bateman’s, came out to greet London Scottie Club members and promised us a 5-minute presentation focused on Kipling and Scotties. It turned into a 15-minute highly entertaining portrait that we decided to make it available for all members to enjoy. So we have included it in this report. Premieres on our YouTube channel at 10am on 14 September.

We ventured around the house and in the kitchen watched a short film which amusingly captured scenes of Kipling’s Scotties on a fishing expedition in a small pond. Some of us also checked out the graves to Kipling’s Scotties near a brook at the back of the wild gardens. Four small stones, with mostly unreadable, weather-worn stones with the dogs’ names inscribed is all that is left of this resting place.

Kipling was definitely a “dog person” and he enjoyed the high life. His blue Rolls Royce is parked near the house in a protective exhibition stand and everything you see in the house and the grounds is as Kipling left it when he died in 1936.

If you look carefully at his desk in the study upstairs, where he wrote his books, you will see a small Scottie ashtray. Apparently he smoked 40-50 a day! Next to the generous writing desk was a petite secretary desk upon which was perched a manual typewriter where his hand-scribbled works were handed to be typed up. Anything he didn’t want published would be incinerated at the end of each day, to avoid the risk of plagiarism. Such was his fame at the time, akin to royalty or pop stars.

During tea, we had an amusing meeting with a former guide who has a lovely Westie and insisted to meet the Club members. He told us he also used to teach at Rudyard Kipling School which is nearby Brighton – further cementing the link between the two locations of our day. Small inter-linked world. Furthermore, if you look at the insignia of the school, the green tools in the badge do rather look like an erudite Scottie!

We ran out of time to do the word quiz. So instead we decided to run it on Sunday evening via Zoom. Open to all members. Some of you joined us, which was great! This quiz, thought up by meeting marshal Fraser Grant, consisted of coming up with the longest word possible from “The Scottish Terriers”.

The winner of the quiz was Kirstin with a 10-letter word. She won the Rudyard Kipling book that was very kindly donated by the National Trust. Thank you Gary. But as Kirstin already has a Scottie chalkboard, as did most of the contestants, that second prize went to Ursula who recently joined the club. She mustered a 7-letter word. But could we get an even longer word? Yes 12 characters. You can watch that fun Zoom video here too.

And below is our photo gallery from the South Coast Saunter. Thanks to those who came. The next Walkabout is being planned by Zelda and Nicola and will take place in north London on 7 November. We look forward to announcing details via WhatsApp to members soon!