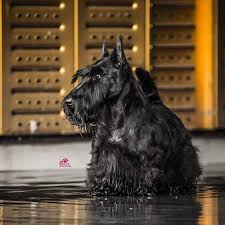 London Scottie Club has received unconfirmed reports that Knopa aka McVan’s To Russia With Love the winner of Crufts 2015 has died, aged 13 years.

The news was spread on Facebook yesterday with reports that Knopa died on 22 July 2022.

Knopa scooped Crufts Best in Show – the first Scottie since 1929 – as well as a string of other trophies around the world including twice winner of Montgomery STCA Specialty Winner and also the US equivalent of Crufts, the Westminster Best of Breed – also in 2015.

Although Knopa faded from the limelight afterwards, Knopa continued to live with owner, Muscovite Mariana Khenkina. She nearly failed to get the flight to the UK for Crufts in 2015. But the rest is now illustrious history.  At Crufts she was handled by Rebecca Cross who had been campaigning her in America.

But her career blossomed a month before Crufts 2015. The first time Knopa was exhibited at Crufts was in 2013 when she was also declared Best of Breed. On that occasion she was handled by her owner, Khenkina. In February 2015 Knopa was judged to be the best example of her breed at the Westminster Dog Show. 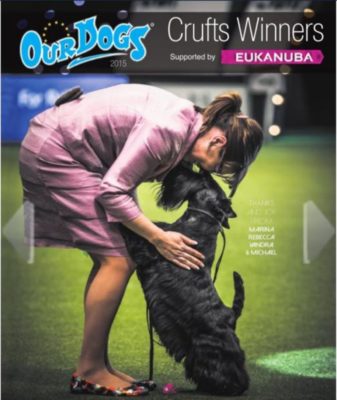 Knopa’s life was also a bit complicated. Knopa was bred by Vandra Huber and her husband, Michael Krolewski, in the Pacific Northwest of the United States. Born 2 June 2009, her sire was Land Rose JP All Right, who has the titles of International Champion, Japanese and American Champion; her dam was McVan’s Fire Starter, another American Champion. When she was three months old Knopa was exported to Russia to live with her owner Khenkina on the condition that Knopa would later return to America to be campaigned in the show ring with the aim of achieving her conformation title in her native land.

LSC’s George Matlock remarked: “Knopa, as she was best known, became an inspiration to all Scottish Terriers and probably helped in part to reverse the decline in the breed. I had the pleasure of meeting Mariana and Knopa in Birmingham in 2016 and I had been at Crufts with my wife Anchalee in 2015 on the Saturday. Our first visit to Crufts – and what sensational news to hear she won on Sunday. We send our condolences to Mariana and others whom we got to know well who had cared for Knopa in her heroic years.”