Which London Borough has the most number of Scottish Terrier dogs? Which part of London, North, South, or North East or South West, has most Scotties? Once Scottish Terrier puppies are registered and with their new owners, that’s pretty much where the trail ends. Until now.

London Scottie Club is always looking to innovate and break new ground. We are as determined as our dog breed. So today we launch the London Scottie Heatmap. In another first for dog clubs, we have carefully introduced a map that shows where Scotties live in and around the capital, based on our current membership. 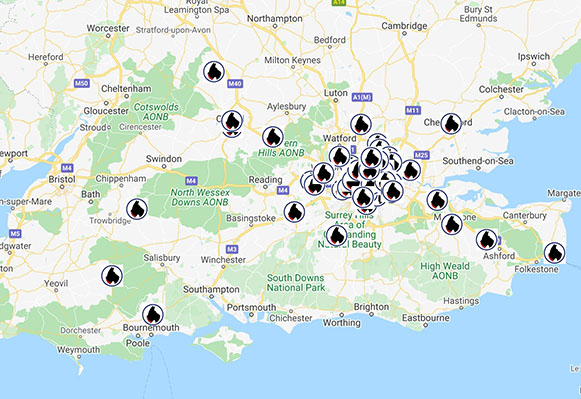 We share some screenshots in this article to show you our general findings. You can see where a Scottie might be living by the Scottie’s head dot, we call “Dotties”, dotted around London. We can see that several Scotties have moved out of London to Home Counties or beyond. And one is actually off the page entirely – back in New Zealand!

But the new Heatmap serves more than curiosity.

Starting end of October 2021, an interactive version of the Heatmap will be shared exclusively with members of the London Scottie Club. Members can then interact with the map by pinching it to expand the map and see in more detail to discover where nearby Scotties might be living. While the club’s strength is that it can bring together a lot of Scotties for fun-filled Walkabouts on a monthly basis, we also know that many of you would like to team up with fellow Scottie owners at other times in smaller groups.

Respecting the privacy of all our members, the actual location of individual Scotties on the Heatmap is not accurate.

“The Dotties have been placed so that the precise whereabouts of Scotties is not revealed. Instead it serves as an indicative guide to help members connect,” explains LSC founder George Matlock.

The new interactive Heatmap is powered by Goolemaps and if members use Googlemaps already the data will become integrated with their Google accounts seamlessly and automatically.

The Heatmap is only shared with bona fide members of London Scottie Club via whatsapp and the actual post code and street names are suppressed from searches. Only the dog’s name is fully shown. What is more, with the location of the Dottie deliberately approximate, it cannot be relied upon to pin-point Scotties. Members can reach out bi-laterally via WhatsApp to that other Scottie’s owner and offer to meet up locally in a Cafe or a park. It is the right of any Scottie owner of course to refuse and to ignore. But if they would like to meet you, we offer a safe way to do so. London Scottie Club always recommends meeting in a public space to ensure that anyone contacting a member is genuine. 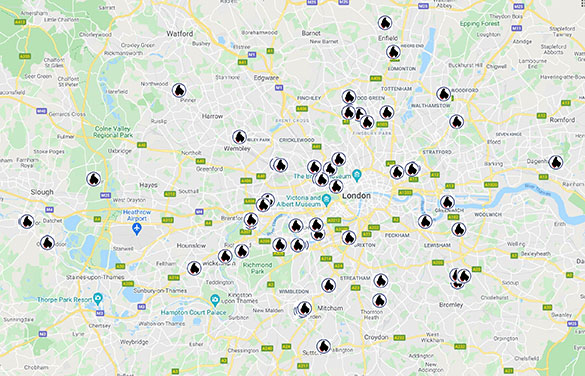 The Heatmap is based upon the registration details that members provided when they joined and can be updated when members change address. The Heatmap was not built using the recently introduced Member Tags.

The Heatmap will be updated regularly and once a year we will share screenshots on this website to show where members have moved to or where new ones joined. Through the lockdown, we have noticed more Scotties in the capital and expect more to arrive into 2022.

Rest assured, the Heatmap does not replace the Walkabouts, and we know that many of you look forward to these larger events!

From 2022, anyone attending a Walkabout must produce their LSC Member Tag displaying their QR code when requested by a Meeting Marshal. The Meeting Marshals have the power to refuse access to Walkabouts to members who fail to produce the Member Tag. This is to promote safety of the walk for all members.