Does it always rain at Wimbledon? 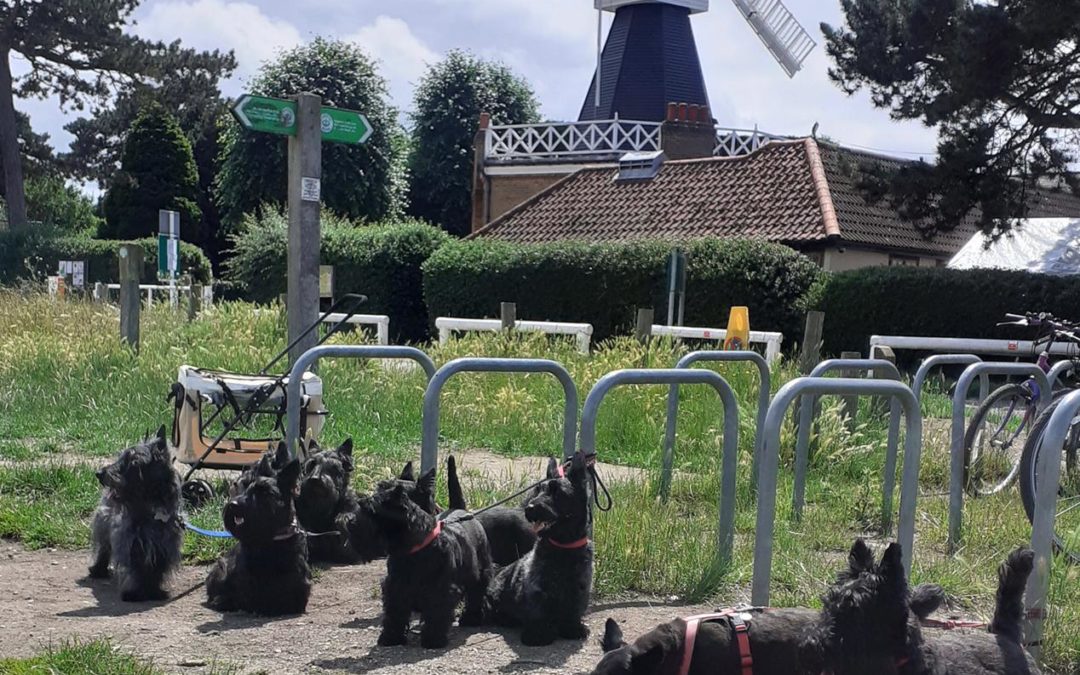 The day of our foray onto Wimbledon Common, home to the fabled Wombles, looked to be plagued by rain, as conflicting weather forecasts offered little hope of a clear afternoon. Our incursion into Wimbledon coincided with the mother of all tennis tournaments, Wimbledon! But knowing it always rains at Wimbledon, 11 intrepid Scotties with their owners braved the weather and arrived at the local landmark, the Windmill, inside Wimbledon Common in… glorious sunshine. First to arrive were Jennie, with Dill Pickle and 5-year old daughter Ruby, clutching a carrier bag with delicious individual treat bags for the dogs. So delicious looking, that more than one member were tempted to try them out themselves!

They were fast followed by Flora, Archie, Maisie and Keeva, (the latter two new members with owner, Michelle) Mila, with Patricia and family and Jann with Ben. Meg, Mac and Bertie arrived with Heather and Paul, and their dogmobile. Members of LSC will be very familiar with the story of Meg and Mac, OAP Scotties, rescued from a very noisy home last year. Fit and more feisty than on previous walks they dealt well with the long leafy route. We were ready to ramble off at scottie pace when Gleb, another new member, texted to say he, Heidi and entourage were arriving in a taxi. We were all hugely impressed at the commitment of our members, and wondered what the taxi fare was!

During the walk, conversation ranged from the cost of puppies, artificially heightened by Covid lockdowns – the average price is now an eye watering £2,500 pounds – to the eternal question, hand stripping or clippers? We stopped many times for photo opportunities, and learned from Jann the best way to teach a scottie to beg. (Ben has perfected the art and always gives a high-5.)

Many, many treats were consumed, and apart from losing half the party at a crossroads and a nettle sting casualty, (Ruby, not a Scottie) we managed to arrive back at the Windmill in one piece. No Wombles spotted, but both Wimbledon Common, and the assembled scotties were universally enjoyed, and we all look forward to the next Walkabout.

Here are some of the photos from this Walkabout plus YouTube video which premiered!